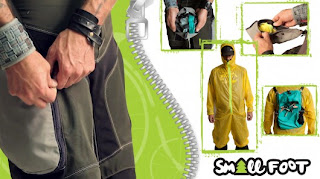 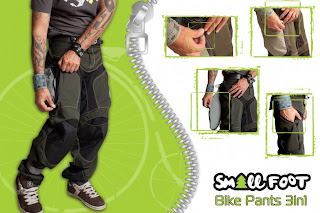 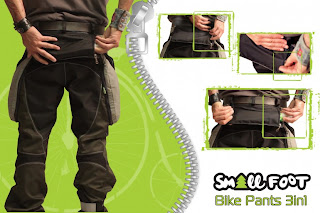 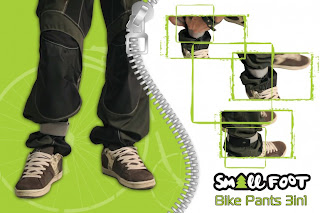 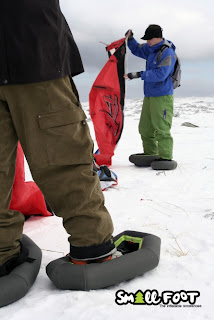 Bulgarian innovation: Bicycle pants and inflatable snowshoes from Any Exit

Pants and bicycles aren't the most natural partners. But maybe that's because there is a lack of pants that both play nice with pedals and chains and don't put the silhouette of your genitals on display for the world to see. The new Small Foot pant is a bicycle-specific pant that attempts to do that and more. They're the latest design from a company also responsible for an innovative pair of snowshoes.

Any Exit, a Bulgarian company, is presenting a new take on bicycle pants. Not only are its pants designed to function more effectively on a chained two-wheeler, they have a number of enhanced features aimed at cyclists of all kinds. Instead of standard pockets, Small Foot's pants feature three removable pouches – one on each side and one on the rear. These pockets look like they'd be bulky and uncomfortable to ride with, but since they zip right off, that doesn't need to be an issue.

One of the side pockets comes stocked with a poncho, keeping the cyclist prepared for rainy weather. The other pocket is stocked with a small, collapsible backpack that expands upon the pants' already generous amount of storage space. Pull the backpack out, and you can carry even more gear – including the pockets themselves.

We like the integration of the backpack and poncho, but we think the pockets would benefit from straps that could turn them into saddle or frame bags. They look like they'd flap around violently on windy days and fast descents, so we'd imagine that many cyclists would opt to remove them. With a few straps, cyclists could enjoy the storage advantages of the pants with the option of carrying gear on the bike instead of their legs.

Small Foot pants also include cuff ties covered in reflective tape. These ties help to keep the cuffs out of the drivetrain while providing enhanced visibility.

Any Exit plans to get the pants to the European market next year. It hasn't set the price yet but gave us an estimate of €160 (about US$207 as of publication). It has not decided whether it will pursue distribution to the United States or other global markets.

. Any Exit also offers Small Foot snowshoes. Similar to the Airlites we covered last winter, they're inflatable snowshoes designed to be used in emergencies. They were created after one of the designers found himself lost in the mountains in knee-deep snow. While he was able to make it to safety, he recognized it would have been a lot easier with a set of snowshoes. Small Foot inflatable snowshoes were designed as a lightweight, easy-carry solution.

Small Foot snowshoes use a different form factor than Airlites and appear almost like rafts for your feet. They pack down to a 10 x 4-inch (25 x 10-cm) package that weighs less than 3.3 pounds (1.5 kg) without crampons. The crampons add extra grip in slippery terrain and can be used with or without the snowshoes.

Any Exit currently sells the Small Foot snowshoes in Bulgaria, Italy, Switzerland and Japan for €189 (approx. US$245) per pair.