The Best Triathlon Gear Of 2013 Eurobike

Some of the more traditional saddle makers have embraced the tri-specific ergonomic design popularized by ISM. Just as Specialized, Bontrager, Cobb Cycling, Dash Cycling and others have done in the few years, Fizik, Selle Italia and Pro are coming out with real triathlon saddles in 2014. The time trial saddles that used to be repackaged as triathlon saddles are phasing out in favor of models that support the rider without acting like a tourniquet for sensitive bits. Fizik’s Trizone has two foam tongs that spread wider toward the nose and a trough between that is designed to provide undercarriage relief. It also has a mount for a hydration and storage system Fizik is including with the saddle. Pro also has a two-tong tri saddle. Pro’s version is narrower and has very firm foam supports that seem up to the task of lifting the rider without compressing too much. The narrower design may suit a different type of rider who may not fit the Fizik or ISM.

Garmin has GPS-based cycling computers nailed. The 510 and 810 computers the company released in the past year are game changers. Garmin packages all of the important features required of a cyclo-computer and a few flashy add-ons into an incredibly intuitive interface that is easy to use and understand. Price is the only issue. At $330 and $500 respectively, they are quite costly. Sigma, PowerTap and O-Synce are offering computers, the Rox 10.0, Joule GPS and Navi2Coach, with the major features for much lower prices, although the interfaces of those three more affordable units don’t compare to the Garmin computers.

Registering low drag numbers in a wind tunnel isn’t reason enough to classify a piece of tri or cycling gear as “good.” Aero performance is really, really important, but equipment has to be practical and functional in addition to being fast in a straight line. Instead of creating products that test well in a wind tunnel but suck in all other categories, manufacturers are now building all types of race gear that is both aerodynamic and useful in other ways. Giro deserves credit for kicking this trend off in the helmet category with the Air Attack, a hybrid aero and road helmet. Now, a swell of helmets have been designed for heat dissipation, safety, performance out of the aero position or other benefits in addition to wind tunnel performance. The same goes for triathlon frames, wheels, aerobar, cycling shoes, hydration and clothing. Having to choose either fast or functional is no longer a problem—you can have both.

The Dura-Ace 9000 mechanical groupset Shimano released in this past year is remarkably better than its predecessor. Front shifting is nearly instantaneous and stopping performance is excellent whether finely feathering braking force or stopping as rapidly as possible. True to its history, Shimano has built the most impactful functional features in its new Ultegra 6800 groupset, and the price is going to be dramatically lower than Dura-Ace as well. This new mid-grade component group will start showing up on many bikes in 2014 and, when spec’d as a complete component group, Ultegra 6800 has the potential to substantially upgrade the functionality of mid-priced bikes compared to models from 2013. 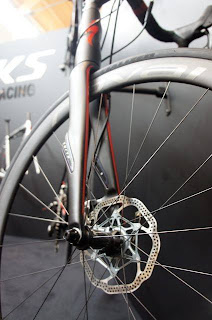 This one has been in the works for a long time. Hydraulic disc brakes are much, much more effective at controlling a bike (mountain or road) than rim brakes and the engineers at SRAM and Shimano have both figured out ways to get around the overheating challenges that come with using hydraulically-driven disc calipers on road bikes. SRAM showed its first models earlier this year and now Shimano has released its version. To go along with the components, practically every road bike manufacturer will have a road frame or frames that are compatible with disc brakes in 2014 and so will many wheel makers. Triathlon bikes still aren’t available with hydraulic brakes, but that may come eventually as well. The functional upgrade of these brake systems is no small change. Look for their popularity to mushroom in 2015 and beyond as cheaper brake systems become available.

While Leanda Cave was holed up in Colorado training for the fall championship races, her old bike was on display at Eurobike. The Canyon Speedmax CF she road earlier this year was in the booth of the German brand sporting part of her race-day setup.

Canyon bikes aren’t sold in the United States. Two years ago, the company invited U.S. media to see its new models under the premise that they may be available in America at some point in the near future and while that hasn’t yet happened, this ProTour-vetted bike is one of the few intriguing aero bikes we can’t get. The front-end is severely integrated and sleek, although it lacks some elements of adjustability and is only compatible with Canyon’s aerobar. Cave swapped this particular frame for a smaller version that is better suited to her fit, and she will race that Speedmax CF when she tries to defend her Ironman World Championship title next month.

Flo Cycling is a start-up wheel manufacturer based out of a tiny office in Las Vegas and the company can’t keep its wheels in stock. In fact, they sell out before even arriving from the factory that makes them in Asia. The key to their success is pretty simple: They sell genuinely aerodynamic wheels for less than $1,000. Flo Cycling has a practical monopoly on this price point for wheels that have been aerodynamically validated. The basic tenants of a fast and smooth-riding rim shape are widely known and not patent protected, yet no other companies have followed Flo’s example to sell race wheels for a price approaching affordable. 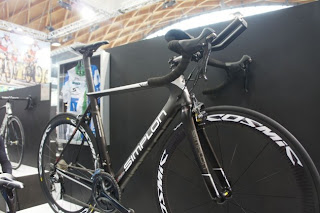 Eurobike is full of companies that don’t sell bikes in the U.S., and several have aero bikes. The fact that these race machines aren’t available to us typically isn’t a big loss. Most are time trial bikes. They’re not designed to be fast, comfortable and practical for most triathletes. Base bars sunken into the top tube are en vogue, and the result is geometry similar to tri bikes from 10 years ago. The Simplon Nexio is a rare example of a bike that is useful for triathlon that has no directly parallel option here in the U.S. It’s a road bike with a forward-set seatpost, frame tubes shaped to be aerodynamically efficient (I have no idea if the frame actually is or isn’t) and comes with clip-on aerobars. Basically, it’s an out-of-the-box bike suited to both triathlon and road riding. Many road bikes sold in America can be set up in this way, but none come pre-set.

Many features of Cervélo’s top-end aero road bike the S5 have trickled down to the 2014 S3, and geometry is the most important one. The S2, Cervélo’s 2013 mid-level aero road frame, is built upon geometry designed for high-level road cyclists. Many triathletes can match its fit scheme, but situating the bike for triathlon is a challenge. The new S3 inherits the S5’s more conservative geometry. For a given stack height, the reach length is shorter, which not only helps road fit for many riders, but also makes the bike more adaptable for double-duty as a tri bike with clip-on aerobars. Other changes include a broader lower headset bearing, thin seatstays, Cervélo’s bottle-specific downtube shape and internal routing that can be set with either mechanical or electronic drivetrains.

After ignoring aerodynamics for far too long, the French company turned out its first genuinely aerodynamic wheelset (compared to other high-end tri race wheels) with a novel strategy to further reduce drag. The tubular-only CXR 80 came with a tire specifically designed to mesh with the rim and a rubber bumper system that filled the gap between the tire and brake track—the result was a uniquely integrated wheel-and-tire system that performed exceptionally well in wind tunnel tests. But this product has a significant drawback. The tire did not fare as well in rolling resistance tests as it did in the tunnel.

The CXR 60 C, a 60mm-deep clincher wheel with the same integrated rim-tire interface, solves that problem. Not only is it slippery in the wind, but it also performs well when it comes to rolling resistance. And the aluminum brake track provides responsive stopping performance that outstrips most carbon rims. 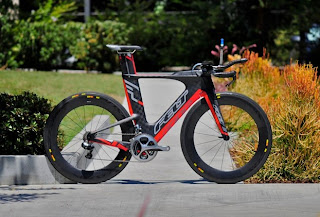 Felt started designing its new tri bike by deciding to throw away the UCI rulebook. Like a few others before them, the Irvine, Calif. bike company set out to make a bike specifically for triathletes instead of road time trialists and those intentions turned into a few benefits for triathletes. First, the frame tubes are gigantic. Striking the rules the UCI places on tube shapes allowed Felt to use radically deep shapes to save a little additional drag. A storage box large enough to bring several gels and salt tabs, although not flat repair supplies, is integrated into the top tube. Frame geometry of the IA is also decidedly triathlon-specific. The stack height is relatively tall for a given horizontal reach length, which is tuned to match realistic age-grouper positions, and the integrated aerobar offers a wide span of adjustment.

Adjustability has become the distinctive design feature of high-end aerobars. Aerodynamic performance is still important, but as a test conducted by Triathlete revealed, the drag differences between a wide range of aerobars is often minimal. As a result, the most appealing feature of excellent new aerobars released in the past two years by leader aerobar makers such as Zipp, Pro and Profile Design is ergonomic design and an incredibly wide range of adjustability including stack, reach angle and width. The 3T Vola pro is the first low-priced bar that boasts the same range of adjustment. At a price of just 200 Euros, roughly equivalent to $250 (US price not yet available), this aluminum bar features the option to adjust those four critical elements of fit.

Thanks for the mention. I appreciate the kind words.

Thanks for the mention. I appreciate the kind words.