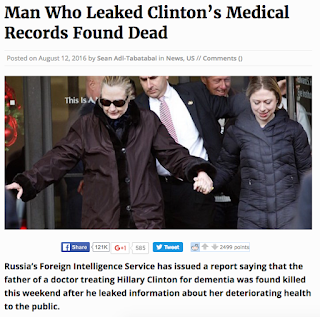 Vincent Fleck, the father of a doctor who leaked Hillary Clinton’s medical information to the press, died suddenly and under suspicious circumstances.

Rumors that Vincent Fleck’s death was related to Hillary Clinton’s leaked medical records is nothing more than unreliable Russian propaganda.

The story went viral when fringe website What Does It Mean published a report on August 11, 2016, under the headline, “Father of Doctor Treating Hillary Clinton for Dementia Mysteriously Dies” that begins:

The Foreign Intelligence Service (SVR) is reporting today that the continuing to grow list of mysterious deaths surrounding US presidential candidate Hillary Clinton has increased after the father of the doctor treating her for dementia suddenly died this past weekend — and who is believed to have been behind the leaking of her most secret medical records.

The SVR first became “alerted/alarmed” regarding the circumstances of this latest mysterious death associated with Hillary Clinton on 17 July, this report says, when a “known/suspected” Central Intelligence Agency (CIA) “hit team” traveled about 70 kilometers (44 miles) from their New York City “base/headquarters” to a small village named Mount Kisco, both being located in New York State.

Upon arriving in Mount Kisco, this report continues, this CIA “hit team” broke into a specialized small computer security companies annex office named Right Click Solutions, located at 322 East Main Street, but were “shocked/surprised” by the unexpected arrival of an off duty employee—who immediately called the local police forces when he noticed the break in—and who were only able to obtain a single laptop computer.

That stolen laptop computer, the report continues, was owned by Vincent Fleck, the father of Dr. Daniel Fleck, the doctor who is supposedly serving as Hillary Clinton for dementia. Clinton medical records supposedly revealing that the presidential candidate has dementia were leaked hours after his death.

The report relies heavily on Russia’s Foreign Intelligence Service (SVR). The primary mission of the SVR is to gather information and intelligence for Russia, and to influence the policies of public and private institutions in foreign countries, like America, according to a complaint filed after three SVR agents were detained in New York City in 2015.

So, considering that SVR exists solely to advance Russian interests in foreign policy, it should not be considered a trusted source of intelligence or news.

As we’ve seen in the past, SVR reports typically spin actual tidbits of news into large conspiracies that make sweeping and unsubstantiated claims about American politics. We investigated a previous (false) report from SVR that a Clinton hit team assassinated a top Democratic official, and a previous (false) report that President Obama had bought an extravagant mansion in Dubai.

In those previous stories reports SVR spun factual reports into Russian propaganda — and the same is true in the case of Vincent Fleck’s death.

It’s true that Fleck died suddenly on August 8th, but facts don’t support SVR claims that a Clinton hit team was behind his death. The 69-year-old died after suffering an unknown medical event while participating in the swimming portion of the Long Island Triathlon on August 7th, Fox News reports:

A 69-year-old athlete competing in a New York triathlon on Sunday died during the swimming portion of the event.

Authorities said Vincent Fleck, of Mount Kisco, died after a lifeguard noticed him in distress.

Suffolk County police said a lifeguard brought him in a canoe to a rescue boat, where he received first aid. He was later pronounced dead at a hospital.

The emergency occurred during the 500-meter swim portion of the Smith Point Spring Triathlon in Narrow Bay.

Police said it was unknown if Fleck drowned or if he suffered a medical event. The Suffolk County Medical Examiner was set to do an autopsy to determine the cause of death.

So, while the exact cause of Fleck’s death has yet to be released, early reports don’t support SVR’s theory that a hit team was behind his death. Also, there’s no proof that Dr. Fleck actually leaked information about Clinton’s health, or that he treated her. Given all that, and the lack of SVR’s credibility, it’s easy to call this one fiction.