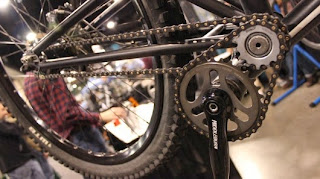 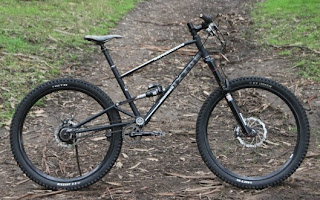 Of all the things that cause wear, tear and noise on a mountain bike, chain slap is certainly one of the most annoying. As its name implies, it occurs when rough terrain causes the chain to be flung up and down, slapping against the chainstay as it does so. While there are things that can be done to minimize it, California-based Cycle Monkey has taken a unique approach – the company has helped to design the one-of-a-kind Battleaxe mountain bike, that features a unique chain slap-unfriendly drive train.

Chain slap can occur on any type of mountain bike, but it's particularly common on full-suspension models. Putting it simply, this is because the swingarm moves up and down relative to the rest of the frame. The cassette moves with that swingarm, taking the back end of the chain up and down with it. The front end of the chain, however, remains in place, joined to the rest of the frame by the chainring. As a result, the chain doesn't always remain parallel to the chainstay, and the two can come into contact.

Working with Idaho's Oxide Cycles, Cycle Monkey developed a two-chain drive train that addresses the problem. One short chain runs from the frame-mounted chainring to a swingarm-mounted gear, then the other longer chain runs from that gear to the rear wheel.

The Oxide Battleaxe
"By creating two separate chain lines with a shared gear, you're able to isolate the chain that is next to your crank and your bottom bracket from the chain that is operating your rear hub," explained Cycle Monkey's Katie Brown, who was demonstrating the system at the North American Handmade Bicycle Show. "You don't have direct drive any more, you have this linkage, but by isolating the chain that runs from the hub to the front of the rear triangle, it allows the swingarm to move without changing that portion of the chain line."

Instead of a conventional rear derailleur, the Battleaxe utilizes a Rohloff Speedhub 14-speed internal-geared hub. Besides being necessary for this particular configuration, it's also less fragile than a derailleur, and requires much less maintenance. Cycle Monkey, incidentally, is the US distributor of the Speedhub. 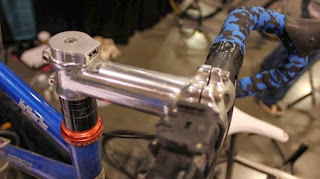 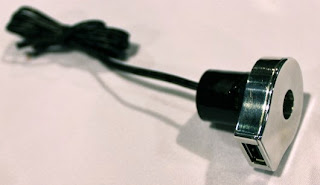 While companies such as Dahon and Nokia already offer products that let you charge your phone with power generated while cycling, both systems do somewhat clutter up the handlebars and stem. Sinewave Cycles' new Reactor, however, is mostly integrated into the bike's existing steerer tube, keeping external hardware to a minimum.

The Reactor's electronics are contained within its cylindrical body, which sits down inside the tube. A single power cable runs from the bottom of the unit, and out through the open bottom of the tube. It then follows one of the fork legs down to a third-party wheel hub generator, which supplies the power. A bottle generator (the kind that leans in and rubs against the side of the tire) can also be used.

At the top of the Reactor's body, a metal USB port protrudes out the top of the handlebar stem, taking the place of the stem cap. A short USB cable can be run from it to the user's smartphone, which is affixed to the bars via a user-supplied mount.

We spotted the device at the North American Handmade Bicycle Show, where Sinewave was taking preorders. It is expected to be commercially available soon, priced somewhere around US$150 to $180 – that price doesn't include a generator. 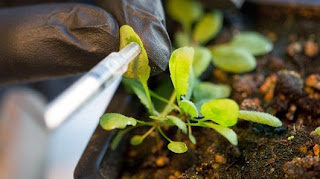 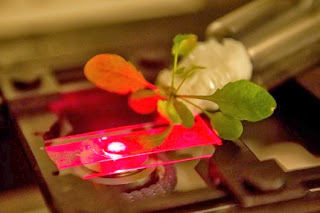 By infusing the leaves of an Arabidopsis thaliana plant with nanoparticles, MIT researchers have boosted the plant's energy production (Photo: Bryce Vickmark)

In 2010, Stanford University researchers reported harnessing energy directly from chloroplasts, the cellular "power plants" within plants where photosynthesis takes place. Now, by embedding different types of carbon nanotubes into these chloroplasts, a team at MIT has boosted plants' ability to capture light energy. As well as opening up the possibility of creating "bionic plants" with enhanced energy production, the same approach could be used to create plants with environmental monitoring capabilities.

MIT researchers use a near-infrared microscope to read the output of carbon nanotube senso...Professor Michael Strano (left) and postdoc fellow Juan Pablo Giraldo in their lab (Photo:... Giraldo examines a nanobionic plant (Photo: Bryce Vickmark)
Chloroplasts are self-contained units that contain all the machinery required for photosynthesis – the conversion of sunlight into chemical energy. Although they can still function when removed from plants, they start to break down after a few hours because light and oxygen damage the photosynthetic proteins. This damage is usually repaired by the plants, but chloroplasts are unable to do this on their own.

As part of an attempt to enhance the photosynthetic function of chloroplasts that were extracted from plants for possible use in solar cells, the MIT research team led by Michael Strano, the Carbon P. Dubbs Professor of Chemical Engineering, embedded them with cerium oxide nanoparticles. These nanoparticles, which are also known as nanoceria, are very strong antioxidants and the hope was that they would protect the chloroplasts from damage and prolong their productivity by scavenging oxygen radicals and other highly reactive molecules produced by light and oxygen.

The nanoceria were delivered into the chloroplasts using a new technique called lipid exchange envelope penetration (LEEP), which was developed by the team. This involves wrapping the nanoparticles in polyacrylic acid, a highly charged molecule, which allows the particles to penetrate the fatty, hydrophobic membranes that surrounds the chloroplasts. Using this technique, the researchers were able to significantly reduce the levels of the damaging molecules.

Building on this research, the team then used the LEEP technique to embed semiconducting carbon nanotubes coated in negatively charged DNA into the chloroplasts. The scientists believed that the carbon nanotubes could allow the plants to make use of more than the 10 percent of sunlight they usually make use of by acting as artificial antennae that would capture wavelengths of light beyond their normal range, such as ultraviolet, green and near-infrared.

Measuring the rate of electron flow through the thylakoid membranes within the chloroplasts, the researchers saw an increase in photosynthetic activity of 49 percent compared to isolated chloroplasts without the embedded nanotubes. Chloroplasts to which both nanoceria and carbon nanotubes were delivered together also remained active for a few hours longer than normal.

MIT researchers use a near-infrared microscope to read the output of carbon nanotube senso...
To test the approach on living plants, the team then used a technique called vascular infusion to deliver nanoparticles to Arabidopsis thaliana, a small flowering plant commonly known as thale cress. This involved applying a solution of nanoparticles to the underside of the leaf, where it penetrated the plant through tiny pores through which the plant usually takes in carbon dioxide in and expels oxygen. The nanotubes made their way to the chloroplasts, resulting in a boost in photosynthetic electron flow of about 30 percent.

Photosynthesis involves two stages. The first sees green chlorophyll pigments absorb light, which excites electrons that flow through the thylakoid membranes within the chloroplasts. This electrical energy is then captured by the plant to power the second stage – the production of sugars. The researchers say it is still unclear how boosting the electron flow using nanoparticles affects the plants' sugar production.

Plants as chemical detectors
The MIT team says the same approach used to enhance the Arabidopsis thaliana plants' energy production could also be used to turn them into chemical sensors. MIT researchers have previously developed carbon nanotube sensors that can identify various different chemicals, including hydrogen peroxide, TNT and sarin. These consist of carbon nanotubes that glow when a polymer in which they are wrapped binds with the target molecule.

"We could someday use these carbon nanotubes to make sensors that detect in real time, at the single-particle level, free radicals or signaling molecules that are at very low-concentration and difficult to detect," says postdoc and plant biologist Juan Pablo Giraldo.

Similar to the EU-funded PLants Employed As SEnsing Devices (PLEASED) project, which aims to develop plants capable of measuring a variety of chemical and physical parameters, such as pollution, temperature, humidity, sunlight, acid rain, and the presence of chemicals in organic agriculture, the MIT team hopes to create plants that acts as biosensors to monitor environmental pollution, pesticides, fungal infections, or exposure to bacterial toxins.

"Plants are very attractive as a technology platform," says Strano. "They repair themselves, they’re environmentally stable outside, they survive in harsh environments, and they provide their own power source and water distribution."

As well as working towards self-powered chemical detectors, the researchers say they are also working to incorporate electronic nanomaterials and devices, such as graphene, into plants.

The team's paper detailing their "bionic plants" appears in the journal Nature Materials.