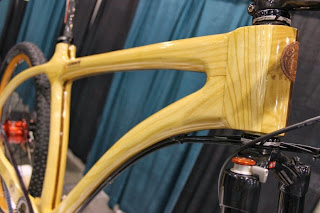 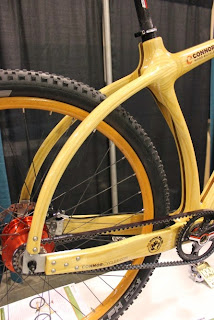 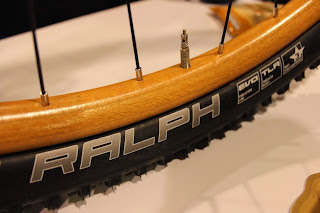 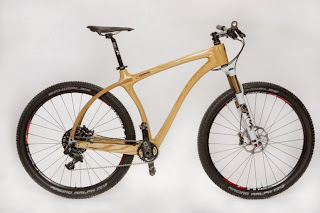 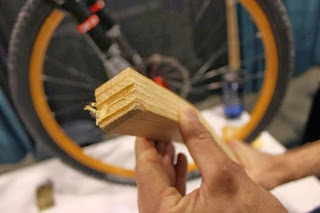 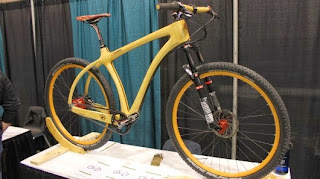 Wooden mountain bike gets by with a little help from Kevlar

Wooden-framed bikes are things of undeniable beauty, but they're also highly prized for their smooth ride capabilities. At the North American Handmade Bicycle Show, Chris Connor of Denver-based Connor Wood Bicycles introduced us to a new mountain bike named DURT, that's had sections of the steam-bent, locally-sourced reclaimed wooden frame reinforced with Kevlar for a gorgeous combination of strength, beauty and performance.

The DURT mountain bike has an American white ash frame with black walnut center stripLayers of Kevlar have been sandwiched inbetween wood in the rear triangle, with aircraft-g...The 29-inch wheels with Ghisallo wood rims and Schwalbe Racing Ralph tiresThe DURT bike has had sections of the steam-bent, locally-sourced reclaimed wooden-frame r...View all
Like the other bikes in the expanding Connor Wood Bicycles range, each DURT mountain bike (which stands for Denver Urban Reclaimed Tree) is individually made and sculpted by hand. The frame is fashioned from reclaimed lumber that can be tracked back to its originating zip code area (specifically American white ash frame with black walnut center strip) and protected against the elements with marine spar varnish.

Wooden mountain bike gets by with a little help from Kevlar
Connor told us that layers of Kevlar have been sandwiched inbetween wood in the rear triangle, with aircraft-grade epoxy used to laminate the layers together. High-stress areas in the front triangle (such as those adjacent to the bottom bracket and head tube) have been hollowed out and lined with carbon fiber for increased strength without adding extra pounds. The resulting ride weighs in at around 30 lb (13 kg) and is described as unbelievably smooth.

The DURT bike features FSA carbon fiber components (including stem, seatpost, and cranks), a DT Swiss 110 mm suspension fork, Magura carbon disc brakes and 29-inch wheels with Ghisallo wood rims and Schwalbe Racing Ralph tires. Other specs of note include wood and Kevlar handlebars, a 14-speed Rohloff internal gearhub, and a Gates carbon belt drive. One of the custom options on offer is beechwood rims (though they're not made by Connor).

Robert Brudenell completing the Leadville 100 in just over 10 hours
The setup featured in the gallery has been used in the Leadville Trail 100, an endurance epic that starts in the Colorado mountains and runs for 100 miles (160 km) on trails and dirt roads, and costs US$10,000. Configurations are available at a starting point of $7,500. 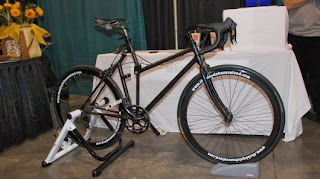 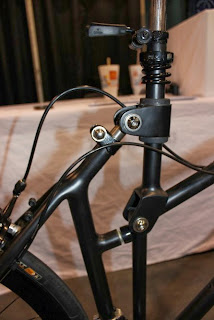 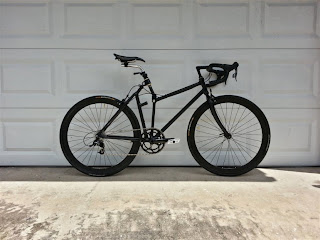 Darwin Bicycle folds forward for the climbs and sprints

The Darwin prototype on display

When you want to climb or sprint on your bike, what do you do? That's right, you get your butt off the saddle and shift your weight forward. According to Tampa-based inventor Felton Zimmerman, however, going off-saddle like that hampers your performance. His solution? The Darwin Bicycle. It features a folding frame that automatically moves the saddle forward with you, so you're always seated.

The Darwin's seat post mechanism Zimmerman is aiming for prices in the US$1,200 to $1,500 range The Darwin bicycle in its normal configuration ...... and folded forward View all
Here's how the Darwin works.

By staying in the saddle, says Zimmerman, riders are able to better maintain control, they don't waste as much energy moving from side to side, and they are able to deliver more torque to the pedals. The folding-in of the frame also results in a shorter wheelbase, making the bike's steering more responsive. Additionally, the height of the bottom bracket drops when the folding occurs, lowering the rider's center of gravity for increased stability.

Zimmerman recently had a single functioning prototype on display at the North American Handmade Bicycle Show, although he has plans for a whole line of bikes including road, hybrid, city and off-road models. He told us that he's aiming for prices in the US$1,200 to $1,500 range, depending on the selection of components.

And as for whether the Darwin will actually work as advertised ... well, we'll just have to wait and try one out. 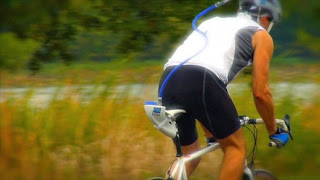 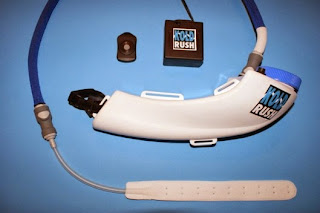 KoldRush: A drip system for your bicycle helmet

We've previously seen handlebar-mounted products designed to spray water in a cyclist's face such as the Q-FOG and Spruzza. US-based inventor Scott Powers has taken the same principle and put it on the rider's head with KoldRush – an add-on system for helmets that's designed to keep cyclists from overheating by releasing drips of water.

The KoldRush system uses a 24-ounce (0.7 l) reservoir which is mounted to the seat post. An internal pump drives water through a tube to an insert running along the inside of the helmet from front to back, to be released onto the head at the user's discretion.

A wireless controller mounted to the handlebars houses a button to control the system, with one push resulting in a preset amount of water released through the insert. There's also a tie-on headband containing a vinyl strip along its bottom to collect water and sweat, steering it away from the rider's eyes and down the sides of the face.

The insert is secured by a velcro strip and Powers says it will fit any size of bicycle he...
As a cyclist, the thought of having an accident in which your head is connected to the seat post incites some squeamish mental imagery to be sure. As such, Powers has designed the tube release itself from the reservoir when minimal upward pressure is applied.

Powers is aiming to take KoldRush to market in time for the approaching US summer and has taken to Kickstarter to raise funds. Early bird pledges of US$150 will put you in line for one of the cooling systems (the headband will need to be purchased separately), with shipping slated for July 2014.

You can hear from Powers in his Kickstarter video pitch below.