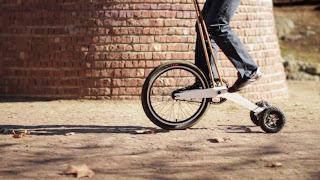 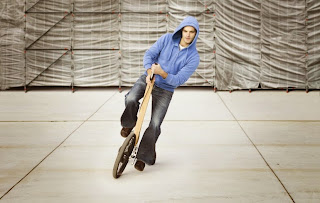 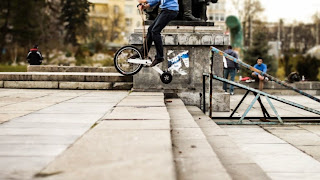 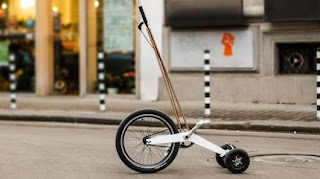 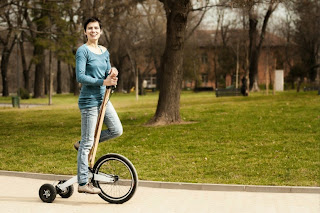 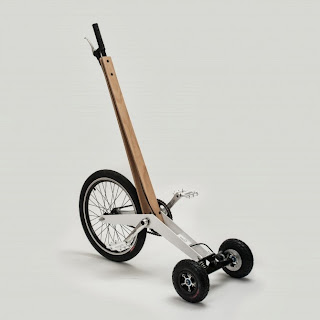 Halfbike takes minimalist bicycle design to the next level

Kolelina is looking to raise US$80,000 through Kickstarter in order to manufacture and sell the Halfbike for $800
Image Gallery (14 images)
The team behind the bicymple may have simplified the humble bicycle with their minimalist design, but Mihail Klenov and Martin Angelov have gone even further with their aptly-named Halfbike. Aimed at inner-city individuals in need of something to go distances of 5 km (3 mi) or less, they've created a compact three wheeler that ditches the traditional seat and handlebars.

Halfbike’s pivoting-rear suspension and short wheelbase means its maneuverability could ma...The Halfbike was designed by Mihail Klenov and Martin Angelov of Kolelinia, both who have ...The Halfbike's standup design and riding pole mean riders receive no rest periods during t...The Halfbike is apparently capable of playing around the skatepark if desiredView all
Klenov and Angelov, the founders of Kolelinia, both have architectural and cycling backgrounds and designed the three-wheeled Halfbike for urban maneuverability and to easily fit on public transit. With the exception of the big wheel in front and two small tires at the rear configuration, the Halfbike is roughly premised along the urban solution transport lines as other devices like the Me-Mover, the clown-like Urb-E and the Aeyo. A traditional bike pedal arrangement drives the trike’s front wheel, while the back pivoting wheels let the rider steer and maneuver by leaning.

The unorthodox design and its lack of seating means riders are required to engage their glutes, quads and buttock muscles continuously to retain forward momentum and remain upright. But in spite of the constant butt workout, the Halfbike’s pivoting-rear suspension and short wheelbase means its maneuverability could make it a better option for navigating Europe’s narrow streets than say a traditional bike. Carrying groceries or the dog, however, may not be ideal as both hands are needed to hang on to the pole for balance and to work Halfbike’s singular brake.

Halfbike is using Kickstarter to raise funds to build and promote its three-wheeled device. The company is looking to raise US$80,000 in order to manufacture and sell the bike for $800.

If all goes to plan, deliveries of the Halfbike with start in June or July of 2014 on a first come first serve basis. Videos of the Halfbike in action can be found on the company's website. 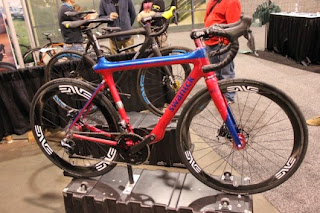 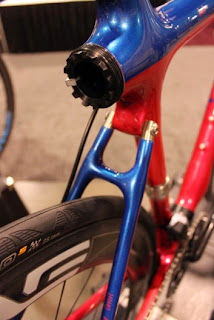 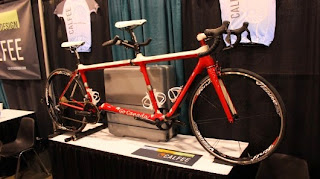 Tandem bikes shorten to a single when there's one rider


One of the two Calfee convertibles, in its tandem configuration

Tandem bicycles are great for allowing couples or friends to ride together, but they're not exactly conducive to riding by yourself. While you could just buy a tandem and a solo bike, one couple recently took a different approach – they got California-based Calfee Design to build them a tandem that can be converted into a single.

In fact, the clients actually got two of the bikes built. One was for themselves, and one was for a couple who are friends of theirs. We recently had a chance to see the bikes for ourselves in the city of Charlotte, North Carolina, where Calfee had them on display at the tenth annual North American Handmade Bicycle Show.

Company founder Craig Calfee had conceived of the design years ago, but shelved it away until the couple (who were previous customers) approached him last fall. It turned out that his concept met their needs.

"These guys travel a lot with their respective stokers [rear riders], six or seven times a year, overseas," sales manager Michael Moore explained to Gizmag. "They wanted to be able to ride as often as they wanted to, and not be beholden to their stoker. What they had to do in the past was simply ride their tandems as a single, so they were up front and there was nobody in the rear, and it's a very long bike, kind of clunky. So, this is an easy way for them to enjoy the best of both worlds – you ride it as a tandem one day, and the very next day you ride it as a solo cyclist."

The coupling point and the detachable seat stays
The frames of both bikes are made of carbon fiber.


In their single configuration, a bit of the top tube extends out behind the seat tube, ending in a circular coupling receptacle (it looks a little like the bike has a jet engine). When it's time to ride as a duo, the seat stays are detached below that device, and the whole back end of the bike is removed via two other coupling points – one towards the bottom of the seat tube, and one at the bottom of the down tube. The extended back end is then coupled on in its place, with the rear wheel swapped onto it.

It's all pretty clever, but not inexpensive – with their current high-end components packages, the two convertible tandems are each worth about US$25,000. 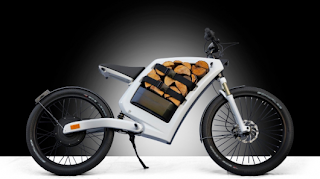 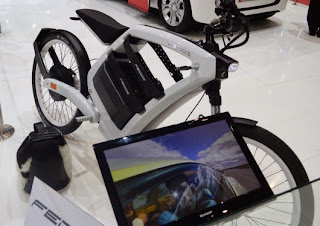 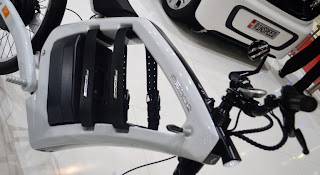 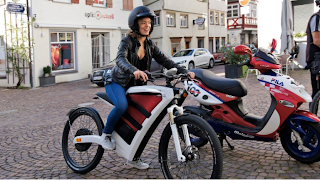 As always, autos were the main focus of this year's Geneva Motor Show, but a smaller category of vehicle made its presence felt. Electric bikes and scooters, such as the Kia Electric Bicycle and Qoros eBIQE, had a strong showing. A third interesting design we found in the halls of the Palexpo, the FEDDZ strikes a balance between electric cargo bike and motor scooter.

The FEDDZ was on display at Rinspeed's Geneva Motor Show standThe FEDZZ's hollow center provides room for the battery and cargoTwo straps keep the rider's load in placeThe FEDDZ has a Philips lighting systemView all
There are a number of electric cargo bikes on the market, but many of them are large, cumbersome affairs that seem to place "cargo" well ahead of "bike." The FEDDZ is a slimmer, more streamlined design that does away with the extended front beds and buckets inherent in other designs, like the 2x4 cargo bike and Urban Arrow. It won't shuttle your children downtown or haul a chest of treasure home from the sea, but it packs enough room for many common items.

The FEDZZ's hollow center provides room for the battery and cargo
Germany's Emo-Bike took a look at the typical motorcycle and realized it could free up a lot of storage space by removing the gas tank. The use of an electric hub motor allowed it to pull out not only the gas tank, but also the bulky, centrally mounted gas drivetrain, while returning only a flat battery pack. That opens up 23 liters of cargo space in the heart of the FEDDZ frame, space enough for things like a motorcycle helmet; a gym bag; or a football, jersey, cleats and a water bottle, as Emo tells it. The cargo section includes two belts to secure the goods for the ride.

The 48-volt lithium-ion battery is integrated into the lower rear section of the central cargo area. It is easily unlocked, removed and carried via a fold-out handle, allowing riders the ability to charge it in a home or office. Two battery options are available to FEDDZ buyers: a 1,600-Wh ECO battery that offers up to 43.5 miles (70 km) of range on a charge and a 2,100-Wh Premium battery that spins the wheels for up to 68 miles (110 km). The ECO battery takes 5.5 hours to charge, and the Premium takes 7 hours. Both are guaranteed for 500 recharging cycles.

The battery unlocks and removes for charging and storage
With its diamond-frame and mountain bike-like Manitou suspension fork, the FEDDZ could easily be mistaken for an electric bicycle. However, it lacks a pedal drivetrain and is classified as an electric motor scooter. The handlebar-mounted drive switch lets the rider control the rear hub motor's output through three modes, which free up to 15.5 mph (25 km/h) or 28 mph (45 km/h) worth of speed, depending upon model. A central display shows key info like speed, battery life and driving range. The battery also powers a Philips front-rear lighting system, and a USB port allows the rider to tap into it to charge his or her smartphone.

The FEDDZ has an aluminum frame with a 1,320-mm wheelbase. It weighs 73 lb (33 kg) before the 25-lb (11.5-kg) battery gets locked into place. Components include the Manitou suspension fork, which offers up to 80 mm (3.1 in) of travel, Magura hydraulic disc brakes and 26-in Schwalbe Crazy Bob tires. Both the seat and handlebars adjust to fine-tune fit around the rider, and anodized footrests give idle feet a place to hang out.

The FEDDZ hit the market last year and is available for €5,990 euro for the 25 and 45 models with ECO batteries and €6,990 for models with Premium batteries (US$8,340 to $9,730). The 45 km/h models require a motor scooter or car driver's license in Emo-Bike's home country of Germany, while the 25 km/h models require only Mofa approval. They both require a helmet and insurance but do not need to be registered or inspected. Regulations will vary in other countries.