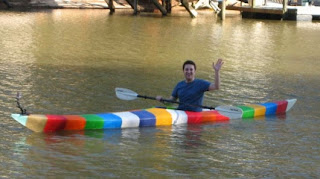 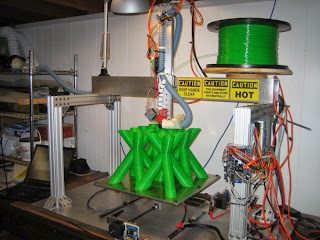 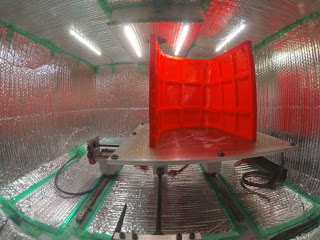 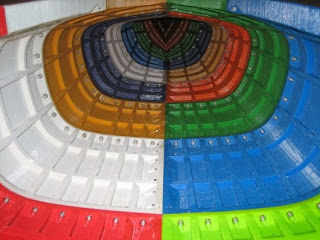 Jim Smith on the water in his 3D-printed kayak

It doesn't seem too long ago that 3D-printers were astounding us by churning out cheeky little trinkets or small replacement parts. But the technology has quickly grown to cater for everything from rapid prototyping to slick-looking commercial products, and a quick snack for astronauts to bizarre models of unborn babies. Jim Smith of Grass Roots Engineering has been designing and building his own home-based, large-scale 3D printer since 2008, and the latest modification recently spent over 40 days producing 28 colorful ABS plastic sections that were bolted together to create a 16.7 ft-long kayak.

A Fab@Home Model 2.0 placed on the build plate of Jim Smith's home-built, large-scale 3D p...How the Jim Smith's custom 3D printer looked in 2011The latest upgrade to the home-built, large-scale 3D printer, with new heater build chambe...Section 15, the largest of the kayak's 28 sections, being printedView all
The 3D-printed kayak design was based on the Siskiwit Bay kayak by Bryan Hansel, but modified for 3D-printing and optimized for Smith's height and weight. It's 16.7 ft (5.08 m) long and 1.7 ft (0.52 m) wide, with 28 sections that have been bolted together with machine screws and brass-threaded thermoplastic inserts, and sealed between sections with silicone caulk.

The sections took a total of 1,012.65 hours (just over 42 days) to produce, at a layer height of 0.65 mm to keep print time down. Smith has added points to attach cameras, handles and future unspecified add-ons. The finished craft tips the scales at a not-exactly-featherweight 64.58 lb (29.29 kg), of which just over 58 lb is ABS plastic, but as you can see from the project overview video below, it does float. 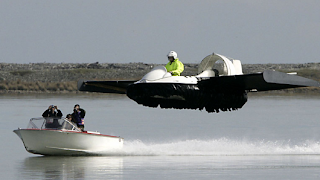 Look! Down on the lake … is it a boat, a plane … it's neither. It’s the “hoverwing”, a hovercraft that flies. New Zealand mechanic Rudy Heeman spent more than 11 years of his spare time (and tens of thousands of dollars) building the hoverwing, a wing-in-ground-effect vehicle that flies on a cushion of pressurized air created between the wing and the water's surface. Hoverwing can reach an optimum height is 1.5m (4-5ft) above the water and has a current top speed of 98kmh (61mph).Heeman told the The Nelson Mail that the "hoverwing", which is almost complete, has drawn local residents from their houses and cars to watch test flights over the Haven in the town of Nelson, at the northern tip of New Zealand’s south island.

Heeman is no stranger to hovercraft – he’s built and sold them for some time. But the hoverwing is his most ambitious project. So ambitious that an early test flight resulted in a crash landing. But it wasn't enough to deter him from completing the project.The hoverwing is powered by a modified Subaru car engine while the body comprises most fibreglass.Heeman says he’s not planning on selling his machine, but had learned so much from the building process that he was keen to build another model.

Via The Nelson Mail
http://www.stuff.co.nz/nelson-mail 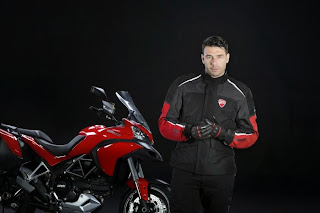 Ducati has announced a new version of its stunning Multistrada 1200 sports-tourer (check out our video review) that wirelessly inflates airbag jackets for both rider and passenger in the event of a crash. A step forward from the motorcycle airbag Honda showcased in its Goldwing series, the Ducati system can protect the rider and passenger even once they’ve separated from the bike.

Honda's airbag-equipped Goldwing - deploying the airbag at the bike end.Ducati's Multistrada D-Air, with wireless airbag jackets.Ducati's Multistrada D-Air, with wireless airbag jackets.
Motorcycle clothing company Dainese has been experimenting with suit-mounted airbags since 2008 – its D-Air system is already available in Race and Street versions. The Race version pops out of the collar to protect neck, shoulders and collarbones, and the Street version is a much larger bag that protects the wearer’s entire torso, front and back.

These systems activate in a slide or a crash, using data from a bike-mounted control box to decide when it’s time to pull the pin. That’s a lot better than other systems that need you to separate from the bike and pull a release cord to activate.Ducati's Multistrada D-Air, with wireless airbag jackets.The news here is that Ducati and Dainese have teamed up to build the D-Air system (presumably the Street version) into the already impressive electronics of the Ducati Multistrada 1200, and release a special D-Air edition for European riders only.

The airbag jackets will inflate in a very quick 45 milliseconds, enough to give excellent core body protection in most crash situations, and the on-bike control system can operate both rider and pillion jackets in an emergency.I’m not sure I’d want to be a pillion behind a rider whose jacket airbag is going off as it could be a bit of an ejector seat experience. But then, if it’s the Street system they’re going to use, it might not be too intrusive.Ducati plans to release more information on April 15. In the meantime, you can check video of the D-Air Street system inflating below.