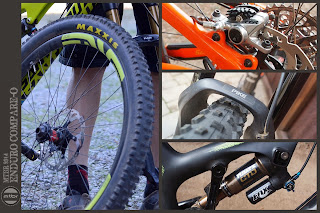 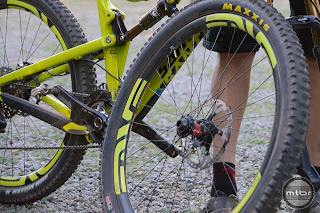 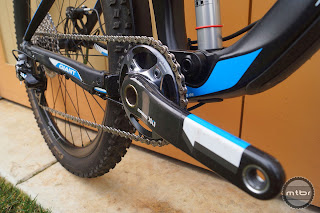 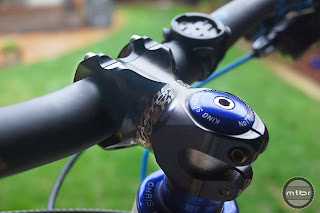 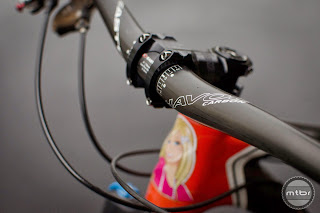 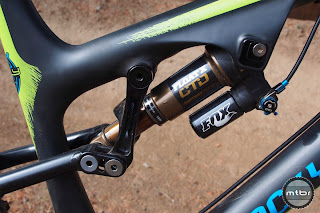 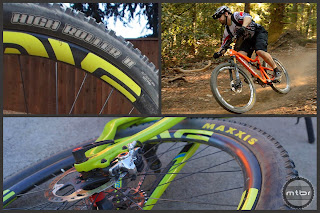 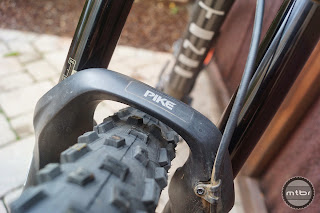 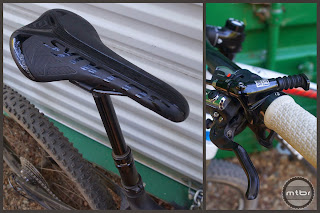 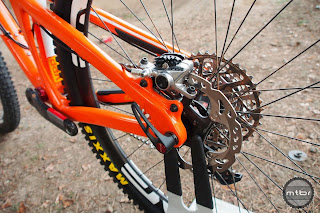 
This article is part of the Mtbr’s Enduro Compare-O. See all the stories in this special section here–http://reviews.mtbr.com/category/enduro-compare-o-2014

Pretend for a minute that your bike shop shopping decisions have no consequences. You can literally buy whatever you want. Then ask yourself what would you do with this newfound financial freedom? What fork would you select? Which wheels would you roll? What drivetrain would propel you down the trail?

It’s a fun—if not somewhat silly—hypothetical that almost every true blood bike geek has had at one time or another. And it’s a conversation we initiated among our test group in an effort to find out what the ultimate Enduro Dream Bike Spec would be.

Obviously there is no single absolute right answer. But after tabulating votes from our testers, some obvious trends emerged. Shimano makes great brakes. SRAM XX1 is a hit. RockShox’s Pike fork is perfectly plush. Carbon wheels are the accepted top-shelf norm.

Here then is a part-by-part breakdown of the components that would adorn our ultimate Dream Bike. As for the frame all this goodness would get draped on, check back soon to find out which bikes won the coveted Mtbr Golden Pliny Award.

It wasn’t a total whitewash, but the drivetrain of choice is SRAM’s XX1 1×11 system, which testers praised for its light weight and efficiency. Plus not having a front derailleur means you’re always in the right chainring, said one tester. Chainring of choice was a 32t, though a few said they’d prefer a 30t, especially on 29ers.

Second place went to Shimano XTR, which was lauded for proven durability, smooth shifting action, and set-it-and-forget-it set-up. Clearly things will get interesting when/if Shimano releases its own 1×11 system, which most observers feel will happen sometime in the first half of this year.

No contest here. The 35mm RockShox Pike was the runaway victor, snaring all but three votes. Our testers love its stiffness. But the real hallmark is its plush feel. “Holy dirt mother of all creation, that fork is good,” bellowed one tester. “It has the smoothest stroke of any fork in the test.”

The Fox 34 came in a distant second, confirming that when it comes to enduro bigger stanchions are the preferred weapon of choice. There wasn’t a single vote for a 32mm fork. “The 34 series is the perfect balance between the Fox 36 in strength and the 32 in weight savings,” noted one tester.

The only lack of meaningful consensus was in fork travel length, which ranged from 120mm on a 29er to 160mm on a 27.5, with 150mm being the most popular choice.

Another landslide, this time in favor of the Fox Float X CTD, which was touted for its ease of set-up, solid mid-stroke support, and predictable mannerisms. Travel preference was 150mm, though a few testers prefer the 140mm version.

The lone outlier of note was a vote for Fox’s 150mm iCD electronic lockout shock. Though its yet to show up as OEM spec on many bikes, the concept of effortless changes between modes with out the need for lever force or taking hands off bars is certainly interesting. We fully expect this type of technology to become more mainstream in the years to come, just as it has with shifting for road bikes.

No other component can improve your ride like a nice set of wheels, nor can any other component do the same amount of bank account damage. While by no means unanimous, the majority vote among our test group went to ENVE’s credit card crushing 27.5 AM carbon wheels, MSRP $2520. “It’s hard to beat the looks and reputation of ENVE,” explained one tester. “And the fact that Steve Peat reportedly raced a full season on one set of these wheels is quite a statement.”

Also receiving votes: the Easton Haven, Bontrager’s Rhythm Pros, and the Mavic Crossmax Enduro, which one tester called the best because “it’s light, stiff and affordable.” Fair points, but he clearly missed the memo about money being no object.

No contest here. Right now no one, according to our test group, is doing mountain bike brakes better than Shimano. In fact, they’re so good several people voted for Shimano XT, claiming that even the Japanese giant’s No. 2 stoppers were better than what anyone else is currently offering. Consistent, reliable, easy to modulate, said one tester. No squeal, long pad and rotor life, and endless power, added another. Rotor size preference was also fairly uniform, with the 180mm front, 160mm rear configuration the most popular.

The only other set-up to receive votes (or a vote in this case) was Magura’s MT8 with 200mm Storm SL rotors.

Tightest battle yet, with the RockShox’s Reverb Stealth just edging the KS LEV. Both posts got high marks for smooth operation and infinite adjustment,.

As you’d expect, this vote was all over the place, with our testers reverting back to the tire that performs best on the trails where they most often ride. Maxxis’ High Roller II barely eked out a majority, but safe to say the best tire for your Dream Bike has a lot more to do with personal preference than dollars spent.

Others receiving votes included the Continental MountainKing, Schwalbe Hans Dampf, Maxxis Minion, Michelin Rockr2 Advanced, Bontrager XR4, Specialized Butcher, and the Specialized Purgatory. Our advice: Since money is no object (in this dream scenario), load up on a variety of rubber so you always have the right tread for the conditions at hand. Just don’t buy anything under 2.35.

No. 1 takeaway here: If your bars aren’t at least 750mm wide, you’re doing something wrong. That steered our test group to the more downhill oriented Easton Havoc Carbon, a 235-gram bar with 20mm of rise. Also receiving votes were Easton’s narrower 711mm Haven Carbon, the 740mm Syntace Vector Carbon High5, ENVE’s Minnaarbar, the Race Face SIXC 800mm, and 3T’s 750mm flat bar, which one rider likes because “a flat bar is great for keeping the front end low on a long travel 29er.”

Here again Easton comes out on top with the all-mountain Haven and DH-oriented Havoc splitting more than half the vote. As for length, 50mm was the most popular choice, with a few testers opting for something slightly longer, and a few leaning to the ultra-stubby 35mm.

Another highly personal choice, but there was a slight lean to ODI’s popular line-up of lock-on grips, with one tester specifically tabbing the slick Troy Lee Design signature series model.

So now that you’ve seen how we’d break the bank, tell us what your dream spec would be in the comments section below.