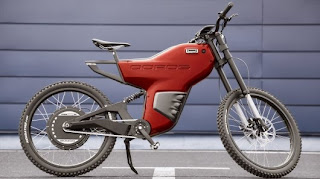 By Mike Hanlon March 10, 2014
.
The Qoros eBIQE is a collaboration with Greyp Bikes, a sub-brand of the Croatian electric vehicle company RIMAC which gave us the 1088 hp Concept One electric supercar

It's de rigueur for upmarket brands to have an e-bike in the stable these days, so it was no surprise that aspiring international brand Qoros should show its eBIQE in Geneva last week. The big surprise was the cloud connectivity and a five inch touchscreen dashboard with an astonishing array of information services. Cheap? NO! Cool? YES!

Now that's what you call a comprehensive dashboard. Flick through the image libarary and y...The Qoros eBIQE is a collaboration with Greyp Bikes, a sub-brand of the Croatian electric ...The eBIQE may not have been the focus of the Qoros stand in Geneva, but it is sure to be t...Qoros takes the wraps of the eBIQE at the Geneva Motor Show last weekView all
Qoros is a Chinese company 50 percent owned by Chinese automotive giant Chery but begun from scratch in 2007 as a completely new entity with a management structure filled with experienced executives from VW, BMW and McKinsey, working with the best available partners – Magna Steyr, Bosch, TRW, Continental, Lear, and Delphi.

The Qoros 3 and future variants
The aim is to produce upmarket automobiles with a level of excellence in all facets of automotive production and marketing similar to BMW, Mercedes-Benz and Audi.

The first international foray for the company was in Geneva in 2013, and with the brand's ongoing development, Geneva 2014 was the next step in the international roll-out, and completely out of left field came the Qoros eBIQE.

Qoros takes the wraps of the eBIQE at the Geneva Motor Show last week
Qoros' eBIQE Concept was jointly developed by Qoros and Greyp Bikes, closely based on the EUR 6,500 Greyp G-12 electric bike which was designed and built in the same Croatian facility which created the 1088 hp RIMAC electric supercar.

The Qoros eBIQE Concept is a derivative of the Greyp Bikes' G-12, seen here at Salon Prive...
Gizmag wrote up the Greyp G-12 last September and the upmarket electric bike (it's actually more a motorcycle) made its first public showing at the prestigious London Salon Prive last year (above) alongside the far-more-expensive, 300 km/h RIMAC Concept One flagship.

The Qoros eBIQE Concept is a derivative of the Greyp Bikes' G-12, seen here at EICMA 2013 ...
Since then the Greyp G-12, so named because it is the twelfth e-bike design from Rimac designer Adriano Mudri (pictured below on the Qoros), also appeared at EICMA and the tie-up with Qoros indicates the Greyp brand is gaining traction internationally.

The Greyp G-12, so named because it is the twelfth e-bike design from Rimac designer Adria...
The major difference between the Qoros eBIQE and the standard Greyp G-12 is that the eBIQE has a hand-laminated carbon-fiber body, PLUS, and this is the bit that takes it from awesome to totally awesome, a complete suite of Qoros' connectivity options.

The Qoros eBIQE is produced by the Croatian electric vehicle company RIMAC
Both machines were hand built in Croatia and if the Qoros eBIQE gets beyond concept and into production, it will no doubt be even more expensive than the EUR 6,500 G-12, though it will also have the massive Chinese electric bike market at its disposal.

The Qoros eBIQE and the Qoros 3 - could it be that Qoros will make as much impact with the...
China makes more than 95 percent of the electrically-powered two-wheelers sold in the world each year. Indeed, walking down the street in a major Chinese city is now a health hazard because e-bikes are everywhere, and no-one obeys any semblance of road rules, so they're constantly coming at you at speed on the street and on footpaths, from both directions ... and they are silent.

The reason for the Chinese e-bike phenomenon is that traffic paralysis and choking pollution is enveloping most of China's huge cities (Europe has 30 cities with more than a million people, America has ten, China has more than 130), so Chinese municipal authorities have banned all powered two-wheelers other than electric bikes in many metropolitan areas. Electric bikes are everywhere in China, and it hence makes sense for an upmarket automotive brand such as Qoros to have an equally upmarket electric bike in the range, as it's by far the quickest way to get around any Chinese city.

The Qoros eBIQE is produced by the Croatian electric vehicle company RIMAC which is fast c...
Gert Hildebrand, Executive Director of Design at Qoros, said: “We designed the eBIQE Concept with our modern metropolitan customers in mind. It embodies some of our key philosophies - simple and elegant design, cutting-edge technology and the desire to make our customers lives easier and more enjoyable. As with our cars we delivered all this while creating a product with uncompromising standards of high quality.

“There are over 130 million e-bikes in China, where several major cities have already restricted the use of gasoline motorbikes or have banned them completely. Chinese e-bikes are primarily used for commuting, but the Qoros eBIQE Concept was conceived to go further – it performs superbly as a commuter and is fun and highly-capable in an off-road situation as well.”

The Qoros eBIQE is no slouch off-road, with quality suspension and more than enough power ...
That the eBIQE is designed to perform off-road is verified by these images from Greyp's facebook page. While neither the Greyp G-12 nor the Qoros eBIQE are likely to see a lot of off-road riding (just as most SUVs never leave suburbia), the Qoros and G-12 do have attributes which make them ideal for the tight congested city habitat in which they will live.

Greyp Bikes' G-12 - the enduro bike for the urban jungle
Light weight, robust suspension and a surfeit of torque make for an agile, lightning-quick city commuter – a go-anywhere enduro bike for concrete jungles capable of matching a helicopter's point-to-point times.

Qoros' biggest product differentiator in China will be services offered by QorosCloud
Qoros' connectivity is based on the Microsoft Windows Azure cloud platform. This pic, take...
Qoros was created in a marketplace with more than a hundred automotive manufacturers. The Chinese market may be the largest in the world, but it is by far the most overcrowded and splintered and, with the aforementioned 130 megacities, the most difficult to do business in.

Qoros hence set out to differentiate its products as both upmarket and relevant, and has used its local knowledge and a partnership with Microsoft using the Microsoft Windows Azure cloud platform, to create a suite of highly advanced connectivity options for its customers which it has dubbed the QorosQloud.

In China, the QorosCloud will be facilitated by Unicom. Here, Unicom Senior Vice President...
Accessed in the car via an eight-inch touchscreen multimedia hub, QorosQloud services can also be accessed from the user’s smartphone, tablet, PC or Mac via a dedicated websiteand a QorosQloud app (Apple iOS or Android).

All Qoros offerings will come with a comprehensive suite of free-for-life services, including vehicle monitoring, social networking, enhanced navigation and 3G connectivity, complemented by a range of annual subscription services such as Dynamic Traffic Info, Dynamic Parking Info and Map Updates.

Qoros' connectivity is based on the Microsoft Windows Azure cloud platform.
The QorosQloud will be one of the key differentiating factors for the brand. Dynamic Traffic Info incorporates the most advanced traffic information system available in China, including incident reports, traffic delays, and updates for travel and arrival times, all in real-time.

The Cloud-connected 65 km/h Qoros eBIQE: Dream wheels for affluent geeks
This latter feature may not seem all that important to motorists in developed countries, but China, the world's most populous country, is currently undergoing the fastest urbanisation in history, with 40,000 people moving from rural to city environs EVERY day. Accordingly, keeping new roads listed on maps is not just a nice-to-have feature in big Chinese cities. It is imperative!

QorosQloud on the Qoros eBIQE
The Qoros eBIQE is fully connected to the QorosCloud
Starting with Greyp's G-12, Qoros set out with the eBIQE to showcase its advanced connectivity options and, it is hoped, create a new standard of electric bike that will be good enough, and connected enough, to leave the Ferrari at home and get there faster, without ever losing track of what's going on in the environment around you, or the environment that counts - cyberspace.

“The intent is to adapt the QorosQloud platform that is already being enjoyed by drivers of our cars so that it would deliver the same level of powerful functionality, convenience and social networking services to enhance the eBIQE Concept rider’s experience,” explains Stefano Villanti, Executive Director of Sales and Marketing at Qoros.

“Even the Eco-drive monitoring service that helps Qoros drivers to increase their driving efficiency is considered in the eBIQE Concept, with the ride behaviour analysis feature conceptually developed to enable users to assess their riding style.

“QorosQloud can allow riders of the eBIQE Concept to integrate like never before with the physical and digital world while making their lives easier and more enjoyable,” concludes Villanti.

The eBIQE has the most comprehensive electronic dashboard we've ever seen for any two-whee...
The eBIQE has a permanent 3G connection via the handlebar-mounted five-inch touchscreen, offering navigation, off-road topographical maps traffic and weather updates, and an awesome dashboard.

The enhanced mapping data will be valuable when riders head off-road. With a satellite overlay map view it can be expected to display topographical information so better informed decisions can be made about what direction to take. As the QorosQloud synchronizes with the user’s smartphone, tablet or computer, rides can be planned ahead from inside the home or office.

The Qoros eBIQE can tell you your tire pressures amongst a host of other information
You can check your bike's condition (tire pressures, charge, available range) from the comfort of your lounge room or office using a smartphone app.

* Street, which limits top speed to 25 km/h so it may avoid being legally classified as a motorcycle in some countries;

* Power, which allows for faster acceleration and a top speed of 65 km/h.

With 60 Nm of torque available across the range, the eBIQE reaches 25 km/h in just two seconds, which means you can filter through to the front row at the traffic lights without fear that you'll be fenced when the lights go green.

Finally, the eBIQE has a charge time of just 80 minutes from a domestic power outlet.

The Qoros eBIQE Concept is a derivative of the Greyp Bikes' G-12, and shares the same inte...
In summary, please remember that the eBIQE is a concept and there are currently no plans for production, so please don't deluge Gizmag's editorial team with emails asking when and where you can get one. Email Qoros directly with your queries and hopefully there will be enough interest to persuade it to produce the eBIQE.

Alternatively, Greyp's interface is pretty good too, and you can buy a G-12 right now for EUR 6,500.