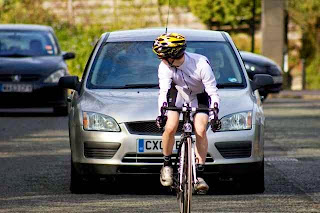 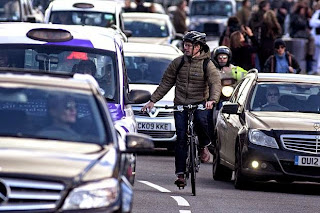 Cyclists! Why do they ride in the middle of the road?

Why do cyclists ride in the middle of the road? Because they're allowed to: a poster from the Department for Transport advises "Cyclists. Ride central on narrow roads." think.direct.gov.uk/cycling.html

See those potholes? Not good for your suspension, are they? To cyclists, they're not just inconvenient they're lethal. The cyclist up ahead might be in the middle of the road for a few seconds in order to avoid a big gash in the ground. Cyclists are expert pothole - spotters. Use this inside knowledge to prevent costly damage to your car's suspension.

But, I hear you cry, cyclists block me even when the tarmac is butter-smooth. Take a look ahead. See any "islands", those refuges placed smack bang in the middle of the road, and placed there to protect pedestrians? Every keen cyclist knows that these islands can be death traps. Some motorists get a spurt on to overtake cyclists before these refuges, cutting in at the last second. Some cyclists, therefore, take what's called the "primary position". (Yes, there's an official Stationery Office name for the middle of-the-road manoeuvre www.cyclecraft.co.uk/book.html). This is cyclists' semaphore for "don't pass me just yet there's an obstacle ahead." Watch what cyclists do when they've passed the island: ninety-nine times out of a hundred they tuck back into the side of the road, and the motorist can then safely overtake. When a cyclist takes the "primary position" before such an upcoming obstacle it's not a mark of arrogance, it's a (risky) tactic to keep everyone safe.

Cyclists will also assume the primary position to avoid "dooring" by motorists opening their car doors without looking, or when about to turn right. Again, once safe to do so, cyclists return to the side of the road.

Not that a cyclist has to be a "gutter bunny," hugging the kerb. Cyclists, in law, operate "carriages", and have done since a court case in 1879. And, as operators of vehicles they have as much right to the whole lane as a motorist. Most of the time cyclists, quite sensibly, allow motorists to pass because that's the safest and nicest thing to do. But it's not a legal requirement. There's no such thing on the road as a "car lane." The only roads that motorists can call their own are motorways - the clue is in the name.

OK, so how about those cyclists who block the road by "riding two abreast". That's also perfectly legal. It's in the Highway Code. https://www.gov.uk/rules-for-cyclists-59-to-82/overview-59-to-71 Remember, motorists - unless their cars concertina like Autobots from the Transformers movie www.imdb.com/title/tt0418279/ - ride two abreast all the time, even when driving solo.

The Highway Code states that cyclists should not ride more than two abreast and should ride in single file on "narrow or busy roads and riding round bends." However, the Highway Code doesn't define what it means by "narrow" or "busy" or quite how rounded the curve has to be before it's considered a "bend." Club cyclists, who often ride in packs, will ride two abreast to chat, and will thin out when necessary, but two riders will often "take primary position" before bends. It should be reasonably obvious why. Far too many motorists take bends, even blind ones, fast, and cyclists do not want to be squished when an overtaking driver realises they've overcooked the corner and has to dive back in to avoid a head-on smash.

Cyclists often "block the road" in order to save their lives, and possibly yours, too.

Carlton Reid is the executive editor of BikeBiz.com. He drives a Nissan Note "but not very often." He's writing a history book on motoring's cycling beginnings, Roads Were Not Built For Cars. www.roadswerenotbuiltforcars.com

Avatar 16/04/2014 22:02:30
James Jones Commented:
I started cycling in London about 20 years ago when I was at Uni, with a daily commute from Streatham to W1. Now, at the age of 40, I've started cycling again, Wimbledon to Victoria. And as many of you will recognise, it's a different world. 20 years ago, most cyclists jumped lights and pavement corners, few bothered signalling. Drivers routinely squeezed cyclists to avoid them passing inside, and the worst of them would deliberately nudge cyclists they thought were getting cocky. Now, there is massively more respect on both sides. The vast majority of cyclists obey road rules, signal, and - just as car drivers do - will thank drivers for giving them room or right of way. Drivers generally give room on the left, stay out of cycle boxes, and also thank cyclists who give way. There are still plenty of idiots on both sides who want a war. But I've been massively surprised at how things have improved.
Report
Avatar 16/04/2014 20:39:06
Richard Jones Commented:
I find this such an strange situation. In the air and on sea, power always give way to non power. Speedboats give way to row boats, planes give priority to hang gliders (say!). There is no moaning or complaining its common sense. Whilst I find some cyclists dangerous, jumping lights and ignoring signals, they are in the minority. Where as I find car drivers more dangerous and don't look or consider other road users because they are in their cacoon. When I did a motor bike test after driving a car for 20 years (I drove as soon as I was legal), it showed me how much a didn't see as a driver. I have always cycled a lot off road, but only recently started road riding again, and cars are the biggest problem because so many are oblivious to anything on two wheels. They wouldnt pass a slow car on a narrow lane but happily try to push past a bike and narrowly miss it. Car drivers need to understand two basic things... 1. The road is for everyone not just them. Learn to share! 2. Cyclists can't do what cars do. Give them space and be patient. How would you feel if your child was cycling and a car pushed them off the road. People have become more selfish and won't give space... You see it with tailgating, with junctions, with queues. How can we as cyclists expect to see drivers change for cyclists? They consider themselves the owners of the road.