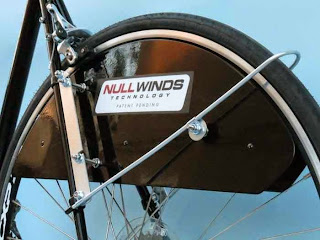 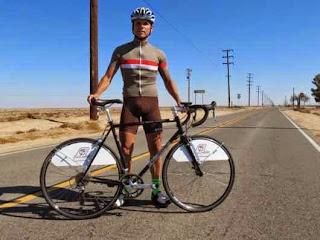 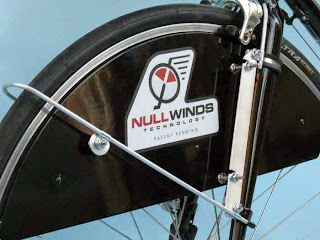 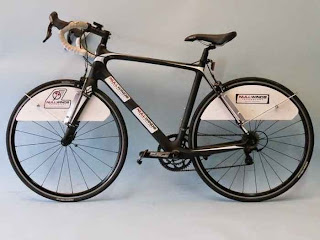 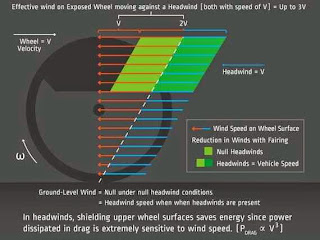 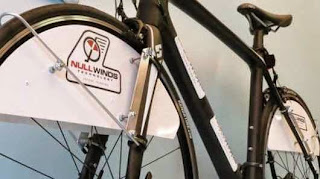 
The fairings are made to fit most standard road bikes

If you were designing a vehicle to be as aerodynamic as possible, it would definitely be counterproductive if parts of that vehicle actually moved into the oncoming wind. According to Los Angeles-based engineer Garth Magee, however, that's just what the forward-turning top sections of bicycle wheels do. His solution? Upper Wheel Fairings, which shield the spokes from the breeze. He claims that cyclists using his fairings can go up to 20 percent faster without any extra effort.

An Upper Wheel Fairings-equipped bike gets put to the test Upper Wheel Fairings attach to the fork in the front ...... and the seatstays in the back The fairings do add 2 lb (907 g) to the weight of the bike, although Magee maintains that ...View all
The exact physics by which the fairings are claimed to work are perhaps a little difficult for the layperson to grasp, but Magee explains them thusly:

"Under null headwind conditions, the wind is null at the bottom where the wheel is in firm contact with the stationary ground; and near the top the wind rises to twice the vehicle speed. By shielding the upper surfaces, the effective wind on the wheel is greatly reduced. And if a headwind is also present, the wind is reduced significantly more."

An explanatory diagram of the physics behind the Upper Wheel Fairings
In road tests, cyclists using the fairings reported speed gains of 3 to 20 percent, depending on how much of a headwind was present. The fairings do add 2 lb (907 g) to the weight of the bike, although Garth maintains that the improvement in aerodynamics is well worth it.

And yes, full wheel covers and disc wheels do already exist. These can reduce stability by catching crosswinds, however, plus covers add extra revolving weight.

An Upper Wheel Fairings-equipped bike gets put to the test
Upper Wheel Fairings, by contrast, are attached to the top section of the fork and seatstays, then finely adjusted in order to get the aluminum fairings themselves as snug with the sides of the wheels as possible – without actually touching them. Nylon spacers keep the fairings from damaging the rims, should they make contact due to wind gusts or vibrations.

Magee is currently raising production funds for his Upper Wheel Fairings, on Kickstarter. A pledge of US$199 will get you a full set, when and if they're ready to go. More information is available in the pitch video below. 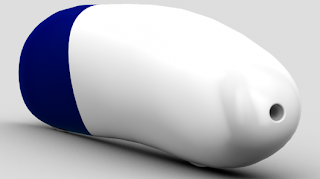 Last September, at the World Human Powered Speed Challenge at Battle Mountain in Nevada, a Dutch team made up of students from TU Delft and VU Amsterdam set the current world speed record of 83.13 mph (133.78 km/h) for an unpaced cyclist on flat ground in the VeloX3. The University of Liverpool Velocipede Team (ULVT) has now announced its intentions to take the title with the Arion1 Velocipede, a bicycle resembling an oversized medicine capsule that has been left out in the sun too long.

The front of the Arion1The Arion1 will boast a gear ratio of 17;1The recumbent rider will be just inches from the ground in the Arion1The Arion1 features an aerodynamic inverted teardrop outer shellView all
The Arion1's design isn't that far removed from the VeloX3, with both enclosing the frame, transmission and recumbent rider in an aerodynamic carbon-fiber shell shaped like an inverted teardrop. The ULVT is claiming their design is 40 times more aerodynamic than a Bugatti Veyron, but being pedal-powered it will still fall well short of the 267.8 mph (430.9 km/h) achieved by the Veyron Super Sport (not to mention the 163 mph (263 km/h) speed reached by Francois Gissy on his rocket-powered bicycle). Instead, the team is aiming for a more modest, but no less impressive top speed of 90 mph (144.8 km/h) for its vehicle.

To achieve this speed, the rider, who will be seated just 5 inches (13 cm) from the floor, will need to get their legs pumping to generate over 700 W of power, which the team points out is enough power to light the average UK home. The power will be delivered to the wheels via a transmission system with a gear ratio of 17:1, as compared to the gear ratio of 4:1 found on a standard bicycle.

The ULVT says the Arion1 will weigh less than 55 lb (25 kg) and, despite the blue and white color scheme pictured in the renderings, the final colors for the vehicle are yet to be decided – although tartan, which was suggested by one team member, has apparently been ruled out.

The recumbent rider will be just inches from the ground in the Arion1
Also yet to be finalized are the parameters of the vehicle, with Ben Hogan, the team leader of the ULVT, telling us the size of the Arion1 will be, "tailored to the rider's exact measurements to allow the most streamlined shape possible." Said rider will also need to carry out an extensive 16-month training program to ensure they are up to the task.

In place of a transparent windscreen, the team is in the process of designing a camera and monitor system that will let the rider see where they are going – an important feature when you're barreling along at 90 mph. Hogan says this monitoring system will not only reduce aerodynamic drag, but allow the rider's head to remain in the optimum riding position.

"To get to the speeds they intend to, the team will have to make sure everything is perfect, from the vehicle’s aerodynamics to the size of its wheels," said Philippa Oldham, Head of Transport at the Institution of Mechanical Engineers, of which all the ULVT are members. "It’s an extremely tough ask to get a human powered vehicle to travel at 90mph – and a leap into the unknown – but with the right engineering approach it is possible."

The ULVT is aiming to have the Arion1 completed in May 2015, ready to take a run at the world speed record at the WHPSC at Battle Mountain in September 2015. The team plans to enter a male and a female rider in the event, looking to claim a new world record for both genders. 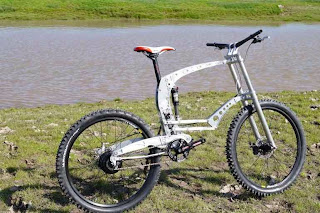 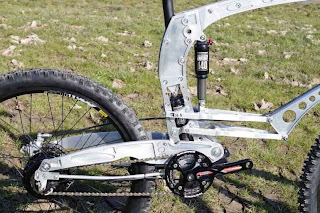 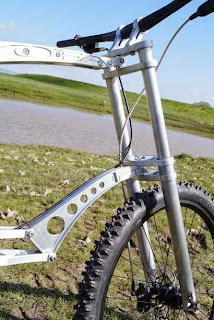 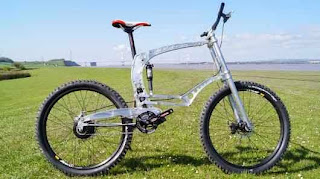 One of the great facts about bicycle design is that there are at least two or three intriguing alternatives for every established way of doing things ... and suspension is certainly one of those established "things." In the past couple of years alone, we've seen leaf shocks, looped wheels and parallelogram seat posts offered up as replacements to the standard shock absorber. UK-based COFA Engineering recently showcased its own unique take on bicycle suspension, known as the NOAH system.

In its current form, the NOAH concept bike has a whopping 230 mm of travel in front, altho...The rear pivot point of the top A-arm is adjustable, allowing the path of the lower yoke t...The fork is lighter than a regular suspension fork, as it doesn't contain any springs, dam...The rear suspension layout allows for the use of a Nuvinci N360 continuously-variable hub...View all
NOAH stands for Normally Operated Articulated Hybrid suspension system, and it was publicly displayed for the first time earlier this month at the Bespoked UK Handmade Bicycle Show in London.

It's a full-suspension system, but instead of incorporating the usual rear shock and front suspension fork, it utilizes two midships-mounted rear shocks. A linkage consisting of two A-arms runs from the telescopic fork to one of those shocks, allowing it to soak up the hits taken by the front wheel. You can see it demonstrated in the video below.

So, what's the point? According to COFA, there are several.

First of all, because the fork legs are supported closer to the wheel, they flex less. Additionally, the fork is lighter, as it doesn't contain any springs, dampers or other shock-absorbing hardware. The weight is instead moved toward the middle of the bike, thus reducing unsprung weight and improving the handling.

It's similar in principle to the single-arm telelever system, used in bikes such as the Scurra Hard Enduro. COFA, however, wanted to boost the amount of travel possible with that setup, while also improving the steering.

"The rear pivot point of the top A-arm is adjustable, allowing the path of the lower yoke to be altered for different riding conditions," COFA's Robyn Taylor explained to us. "For example – the steering angle when not compressed can be set steeper than usual, resulting in a quick-steering bike on the flat. However, when the forks compress the steering angle can be relaxed, aiding handling over rough terrain."

The rear pivot point of the top A-arm is adjustable, allowing the path of the lower yoke t...
Additionally, the rear suspension layout allows for the use of a Nuvinci N360 continuously-variable hub transmission, eliminating the need for a rear derailleur – although slightly increasing the unsprung weight in the back.

In its current form, the NOAH concept bike has a whopping 230 mm of front travel, although it also tips the scales at 40 lb (18 kg). For that reason, its designers are looking into the use of lighter building materials for subsequent versions.

"The end goal is to produce a limited number," said Taylor. "We had a good response at the London show, but we do accept it's not to everyone's taste!".