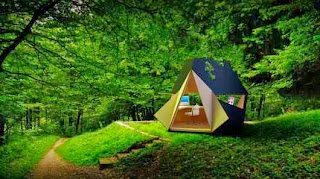 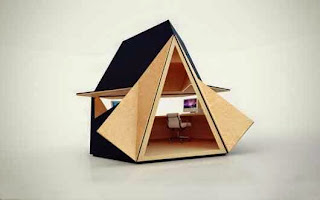 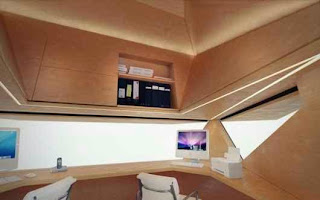 A couple of years after it was first unveiled, Innovation Imperative's Tetra Shed is available to buy. The Tetra Shed caused a stir when it was launched, with its sleek design and its capacity for modular extension. Now, interested parties can get their hands on customized versions.

The sheds are 3.3 m (10.8 ft) tall and take up 10 sq m (107 sq ft), with 8.5 sq m (91 sq f...A front view of an open, furnished Tetra ShedAn angled front view of an open, furnished Tetra ShedA side view of a Tetra Shed with open window slotsView all
The Tetra Shed concept was born of Innovation Imperative's desire to make use of more modern methods of construction and was debuted in 2011. The shed idea was chosen as a multi-purpose space that could be joined together an unlimited amount of times, and that was easy to assemble. Initially, it was going to be rolled out to just the UK market, but the company received so much international interest and feedback that it had to revise its outlook.

"It's been redesigned three times based on the feedback we've received and we're now using a flat-pack system that will be distributed in over 20 countries," company architect Ajasa-Adekunle tells Gizmag. Describing the demand that the company faced, he continued, "It's become an entity in itself. The interest has become overwhelming."


The feedback proved invaluable and, although the shed looks very much the same as the original design, a lot of alterations have been made to the manufacturing and assembly processes. The unusual angles of the design had meant that the assembly required some expertise, but revisions have been made so that the shed can now been put together by just a couple of people without special skills. What's more, the charm of the original design has not been sacrificed.

Each shed is constructed from a plywood core and can be painted on the outside or clad in any material, such as cork, rubber, copper or zinc. The sheds are 3.3 m (10.8 ft) tall and take up 10 sq m (107 sq ft), with 8.5 sq m (91 sq ft) of space internally. They also feature programmable electric underfloor heating and LED lighting, both of which can be controlled via mobile apps.

The sheds can be configured in a multitude of ways. Windows can be added in or removed, cladding materials can be customized, and the sheds can be furnished to differing degrees or left empty. This flexibility means that they can be used for a variety of different purposes. Indeed, the company has a number of existing configurations for use as a lounge, wet-room, sauna or kiosk, among other things.

An internal view of an office-use Tetra Shed
This flexibility is likely what has generated so much commercial interest. Ajasa-Adekunle explains that the company has a 168-unit order for a site in central London that is due to be delivered next summer, pending current planning application work. It also has interest from Google and a multitude of other "creative agency-type firms."

Ajasa-Adekunle says its not just commercial businesses that are showing interest though. "It tends to be hobbyists who come up with the most interesting ideas," he says, and goes on to list a range of unusual uses that have been proposed for the Tetra Shed, including beehives, bird hides, dark rooms and yoga or meditation spaces. The company even suggests that as few as four sheds can be joined together and used as a one-bedroom home.

The Tetra Shed can be configured and ordered on the company's website now, with prices expected to be added next week. Pricing is dependent on the customer's configuration preferences, but is expected to be around £15,000 (US$25,200) per shed. Orders will take about three months for processing, building the tailored configuration and delivery. 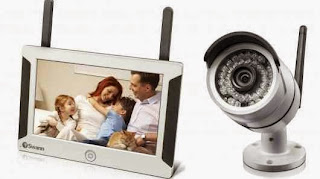 The SwannSecure system consists of a seven-inch viewing monitor, a 720p camera and iOS and Android application

By Nick Lavars April 16, 2014
The SwannSecure system consists of a seven-inch viewing monitor, a 720p camera and iOS and Android application
Australian-based manufacturer of home surveillance products Swann Security has announced a new all-in-one connected monitoring system. The Wi-Fi-enabled SwannSecure system consists of a 720p day and night camera, a 7-inch monitor and a companion app for both iOS and Android devices for monitoring while on-the-go.

The aluminum camera uses a 1-megapixel CMOS sensor and features an infrared cut-off filter for a night vision distance of 50 ft (15 m). It also sports a built-in microphone to record sound, while all cabling is fed through a protective stand to prevent damage from the weather ... or vandals.

The system includes motion-triggered recording and an 8 GB MicroSD card for storage, though this can be expanded to 64 GB. A micro HDMI port allows for viewing on HD televisions or LCD monitors, while also enabling recordings to be backed up on an external hard drive.The SwannSecure system is priced at US$380, though the camera can be purchased individually for $140. It joins other Wi-Fi-enabled home monitoring systems such as Belkin's NetCam ($130) and Piper ($239), the latter of which is capable of 1080p recording.