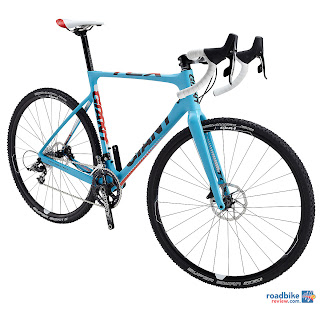 Giant Goes All In With Disc Cross

This whole disc brake-equipped cyclocross bike thing, it’s got legs. Or perhaps that should be “wheels.”

Following the unveiling of new hydraulic disc braking systems first from SRAM and then Shimano, plus launches from Raleigh and Ridley that were both heavy on disc brake spec’d bikes, the world’s largest bike maker is getting in the cross-disc game in a big way.

This week, Giant Bicycles unveiled it’s 2014 line-up led by the TCX Advanced model, which will only be available in disc models in the U.S. (We have to wonder if the line might be different in Europe and elsewhere, where disc-brake technology has not yet been so readily embraced).

Indeed, the Giant Factory Off-Road Team rider, who races ’cross, cross-country, and enduro, was reportedly part of the development process for the new bike. “I’m super excited about seeing some of the off-road technologies like disc brakes and a front thru-axle crossing over to cyclocross,” said Craig in a Giant-issued news release. “The new geometry helps too. It just makes these bikes more versatile and way more capable in different types of conditions and terrain.”

That geometry change includes a slightly lower bottom bracket height plus a slightly longer wheelbase, which combine to lower the bike’s center of gravity and increase overall ride stability.

Unpainted, size medium TCX Advanced frames have a claimed weight of 1,050 grams, feature asymmetrical chainstays, internal cable routing, and Giant’s proprietary “D Shaped” D-Fuse SL Composite seatpost that purportedly dampens vibration and adds compliance. Tire clearance is a yawning 50mm up front, and 44mm in the rear, and it has two sets of water bottle bolts if you want to turn this into a long-distance adventure bike.

We actually got our first look at this bike back in the spring during a one-day media pow-wow at Giant USA headquarters near Los Angeles. As it was then, the top-line TCX Advanced 0 will come dressed in SRAM’s new Red 22 hydraulic braking system, along with a 42-36 Rotor 3DF crankset, and Giant house brand carbon P-CXR0 wheels that are tubeless ready and have a claimed weight of 1,430 grams. Availability is slated for August with an MSRP of $7,150.

One step down is the TCX Advanced 1 for $4,050, which comes with SRAM Force 10-speed spec and heavier P-CXR1 Giant wheels (claimed weight 1,750 grams). The Rotor 3DF crankset carries over. And for whatever it’s worth, we’re already digging the matte blue paint scheme.

One step below the two-bike TCX Advanced line is Giant’s brand new three-bike TCX SLR aluminum-framed cross platform. Claimed weight for an unpainted size medium frame is an impressive 1,200 grams, and most of the design features of the TCX Advanced line trickle down to these alloy rigs, including the 15mm thru-axle design, asymmetric chainstays, internal cable routing, dual water bottle mounts, extra-wide tire clearance, and D-shaped composite seatpost. The TCX SLR’s also have rack mounts if you want to create a speedy – and versatile – commuter rig. 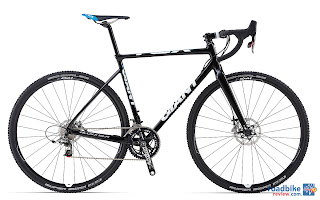 The TCX SLR 0 is the top of Giant’s alloy cross bike line-up, though this bike is not part of the U.S. product offering.

Spec mimics the TCX Advanced flow, with the TCX SLR 0 being outfitted with Red 22 hydraulic disc, while the SLR 1 gets 10-speed SRAM Force hydro disc. Both bikes are spec’d with the 1,750-gram P-CXR1 Giant wheels. The SLR 2 drops down to Shimano 105 and mechanical disc brakes. Pricing was not yet available on the SLR 0 (which will not be available to U.S. customers), but the SLR 1 will run $2,975 and the SLR 2 is $1,600.

Finally, Giant also rolled out the women’s-specific Brava SLR line-up, which is built around a sub-1,200-gram alloy frame. Geometry tweaks include a shorter top tube and longer head tube.

Highlights are in line with the other two new platforms, including disc-brakes and 15mm thru-axle design. SRAM Red 22 hydraulic disc adorns the Brava SLR 0 ($4,800), while the Brava SLR 2 ($1,600) gets Shimano 105 and mechanical disc. Availability is also slated for August. For more info, check out www.giant-bicycles.com.