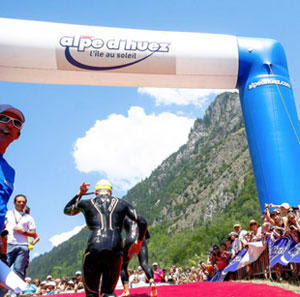 Nicholls who had won 70.3 UK about a month ago and rower turned triathlete Todd Skipworth were first out of the water, and Rachel Kung who is known for her swim prowess was right there too. James Cunnama who had just finished in the runner-up position at Challenge Roth had a great swim too and was barely a minute behind the leaders.

French Pro Herve Fauvre set the early pace on the first mountain and Cunnama soon made contact with the leaders, the South African however crashed on the bike on the following descent and has some cuts and bruises but is currently reported to be ok. Fauvre and Nicholls continued to lead the bike and reached the bike run transition first with Skipworth not too far behind. Meanwhile in the women's race Ironman France champion Mary Beth Ellis had taken charge of the event on the bike and the rest of the field seemed to be left racing for the other podium positions.

Nicholls pulled away from Fauvre on the run and not only claimed his first long course title but also a very much prestigious one. Fauvre finished second and Skipworth was third. Stephen Bayliss who also had competed in Roth finished fourth.

We expected Nicholls to be over the moon and ready to conquer some other long distance events, but this may not be so. "That is ridiculous - the hardest, the craziest race I ever done. That is the start and finish of my long course career. Coach get my swim going so I can go back to ITU," said Nicholls post race.

Ellis truly was untouchable and finished the race in 6:20 and now has two wins and one runner-up spot to her name. This year she had a massive 21:39 advantage over 70.3 UK champion Eimear Mullan, and looks to be in prime form going into Kona.

"I love our team TBB trip riding to and racing Alpe D'Huez every year. The event is only 8 years old but has already become a classic with Chrissy Wellington, Nicola Spirig, Jodie Swallow among those taking the title. The race starts with a frigid swim, conquers 3 Cols, and finishes with a high altitude 22km run. Everything about the event is tough and I love the suffering especially the final climb up Alp d Huez," said Ellis to slowtwitch. "Felt good after the first. climb. I always seem to struggle there but once down it all come together. I found my rhythm and built on it from there and I think it was great prep for Mt. Tremblant in a couple of weeks. I feel I am on course for a good race at Kona this year."