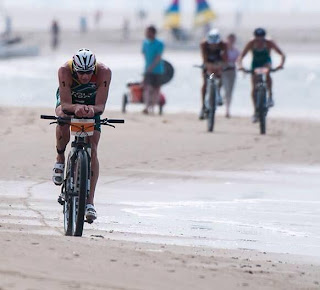 
Conrad Stolz has just proved that he is in a class of his own after winning the ITU Cross Triathlon World Championships (Den Haag, Holland) for the third time in a row yesterday!

Conrad, you are an inspiration!

New from the XTERRA team in Spain comes XTERRA Matador, which is billed as both the longest XTERRA event and the toughest ‘half iron distance’ triathlon in the world.Taking place on 24 August in Baza/Gorafe, the race will be hosted in the so-called ‘badlands’ in the province of Andalucía, Spain. It will offer athletes a unique ‘desert experience’ as they make their way through the barren, but mesmerizingly beautiful desert panorama.This latest XTERRA event to land in Spain features a 2000m swim, 90K of mountain biking and a 21K off road run. The final 500m of the run will go through the tunnel underneath the Bullring (Plaza del Toro) as athletes make their way towards the light at the end of the tunnel!


XTERRA Matador will finish inside the Bullring on the outskirts of the town of Baza and will be accompanied by traditional Spanish music and folk dances, for a unique Spanish feel.

The off-road XTERRA tri series is going from strength to strength in Spain. On 23 June 2013, the Catalonian town of Berga hosted its very first XTERRA event. XTERRA Berga is part of 2013 XTERRA Berga Spain Tour, offering up to ten slots (tour ranking) for the XTERRA World Championship in Maui, Hawaii.

Besides being a popular destination for triathlon events and outdoor activities (hiking, mountain biking, climbing), Berga is also famous for its historical and cultural heritage, especially the week-long traditional Festival of ‘La Patum’, recognized as a Humanity Heritage by Unesca in 2005.